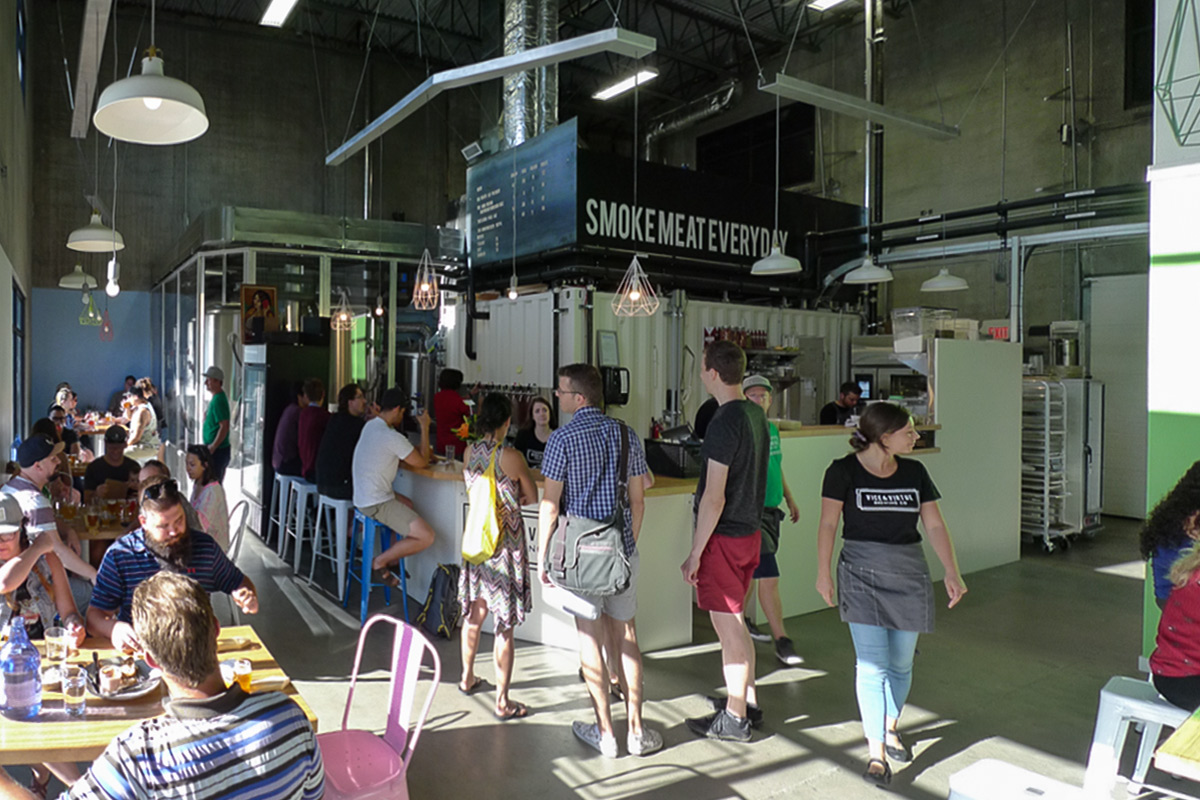 It’s no secret that the Kelowna craft brewery scene is intensifying in scope and creativity, however, what is new is the coming of age of its bar and bites scene. Long a town where coffee shops (gotta love ’em, but enough already) and bland chains dominate the top downtown real estate, new go-getters are now finding their own cool new areas to rival them (the industrial north end, or downtown’s quaint courtyards and back alleys*), creating drinks that far surpass them (expect perhaps the bananas beer selection at Craft), and now it’s safe to say, way better and more interesting food as well. The latest player is Vice & Virtue in North Kelowna.

Started up by a murderers’ row of local gastronomic talent, plus an interesting import, the brewery’s team is built to run on all cylinders.

The team is made up of award-winning Tantalus Vineyards’ winemaker, David Paterson and his wife Stephanie Mosley; a former sous-chef at Waterfront Wines, Nelson Daniels; the current front of the house manager at Tantalus, Ryan Fipke; owner of one of the Okanagan’s most successful wine tour companies xwinetours, Matt Wentzell; and brewer James Windsor from Toronto’s Indie Alehouse. Having consumed many a flavourful IPA from said ale house, I can personally attest to his brewing prowess, and they’re lucky to have him.

“We are in good company with Kettle River, BNA, Red Bird and Tree in the neighbourhood. Having access to such great local fruit, wine barrels, and having Gambrinus malt not far away makes for a brewers paradise out here.”

The new 2,000 square foot space features a 50 seat lounge, open kitchen and bar area, with a beer fridge and fermentation tanks taking up the back. The place is a crisp and clean, utilitarian modern machine, softened by the pastel palette du jour, the overly trendy tolix stools and geo pendant lights (serious half-life on those bad boys). And while it would be easy to say this falls smack into the new minimal design look of many a nouveau craft brewery (the web designer in me calls this “flat design” for interiors and packaging), it’s so cheerful and devoted to its basic and bold self that I love it. I mean, a rosy framboise beer and the best smoked brisket sammy this side of Montreal – no it’s not pastrami but this combo will make you forget all about a cherry soda and a medium on rye with sunny mustard.

The fantastic beef brisket on a brioche bun with slaw and South Carolina bbq sauce – $12.

That Smoker Tho – Serious Eats Here

Yes, that’s right, they have a smoker. Out back they smoke their meats, poultry, even fish. Chef Nelson Daniels has defined a repertoire of bright and bold flavours using lots of fermented and preserved goods, and a whack of charcoal and smoke. And while it shows up in traditional areas like the aforementioned sandwich, it’s also found in more unexpected and delightful ways as well, like the smoked pork steak with chimichurri sauce ($14).

My favourite use of the smokey goodness was, to my surprise, not with the charcuterie (albeit a great plate) but how it was deliciously deployed in a tasty trout ceviche – it had a nice light cure to play off those zesty fresh flavs. While we didn’t get a chance to try them yet, the lighter courses in the salad and bowl school of things looked more virtue than vice for sure: steelhead trout fillet with sprouted grains, buttermilk dressing, fennel, dill ($15), or heritage red fried rice with broccolini and kimchi aioli ($13) – thus justifying the beers!

The smoked trout, prawn and scallop ceviche was both bright and smoky, a nice contrast – served with corn chips – $12.

Riiiiight this is a brewery. Yes the beer is very good. They have four pretty diverse styles on the go (as wide-ranging as you can go for summer): the White Lie Pilsner (tastes like grapefruit – very citrusy), the Love Potion Raspberry Berliner Vice (like Sour Patch Kids meets a classic Framboise), the Giver Pale Ale (a crisp citrusy, evergreeny scented awesome west coast style), and our hands-down fave, the Homewrecker NEIPA (all the crispness you like from a west coast IPA, but just a little more floral, fruit and body – without the maltiness some equate with the New England style). Like rap, I don’t think these East Coast-West Coast distinctions really apply anymore and this beer proves it.

The vibe in the bar, however was distinctive on the opening night. A whole lotta Okanagan lifestyle: bros in flat peak caps emblazoned with logos that have nothing to do with sports teams or heavy machinery, clad in skinny walking shorts talking about their Insta feeds (sometimes I swear it feels like Kelowna is full of hipster mormons). I’d say it feels the exact opposite of the rustic, idiosyncratic, arty and effortlessly cool, Kettle River Brewing around the corner – which is a good thing – vive la différence! But to be sure, it seemed very family-friendly, in spite of its rather loud bouncy acoustics (was there even music playing?), and the service was super informative and confident (the new Craft Beer Market could learn a thing or two here), and of course, Kelowna-friendly as always.

While the sealed-up tinted windowed facade doesn’t look the most inviting on a summer’s day, it is in fact a delightfully bright and airy vibe inside. The throngs of bikes outside perhaps a testament to its chill-out-with-a-cold-one destination status. And yes, like all new places, they’ve gotta Fight…For Their Right…to PAAAAT-IO (well not really fight, but it’s always slow to get one here – the city should just give them La Bussola’s license, lol) and they aim to have that in place, out front by next year.

With Kelowna becoming home to more newcomers, many who won’t settle for suburban-style chain mediocrity and homogeneity (side note: we do have some decent restaurant chains here to be sure, but they’re never good at all the things are they?), dens of decompression, drink and deliciousness like Vice & Virtue can be a necessary space to catch some social vibes away from the phone, the Twitch stream, the Netflix, the commute, and increasingly, our cramped quarters and shared living spaces. Here’s to Kelowna’s new social spaces where indulging is back, and laptops or hottie head-geared hostesses are nowhere in sight.

One more pic of the delectable beef brisket, heaped high and shaved thin.

* Technically the E-Taco container mini resto in the alley by the Sails is a partly run by Earls. But the idea is the city now demands more interesting options.

Want to catch up with us in your inbox?

Sign on up to read all the latest stories and reviews all in one place.